With a population over 1.3 billion and an average age of 25 years old, India offers a compelling demographic that needed to be explored in person for investment opportunities. My companion for this trip was a 6’ 6” portfolio manager from our Naples office; together we set off quite confident we would NOT blend seamlessly into the Indian landscape. However, after a 16- hour flight to Dubai and a few days in the Emirates (where it seems the entire country is under construction) we flew into India prepared to meet with seven diverse businesses (a data management firm, technology company, bank, investment firm, seaport, REIT and hedge fund) to gain a first-person impression of this ancient country and its economy.

With just one week at our disposal, we focused on the two major business hubs – Bangalore and Mumbai. Our first stop was the Silicon Valley of India – Bangalore. Most global IT companies have based their Indian headquarters here and many of the country’s entrepreneurs are setting up shop in this southern city that was once known as a place to retire. 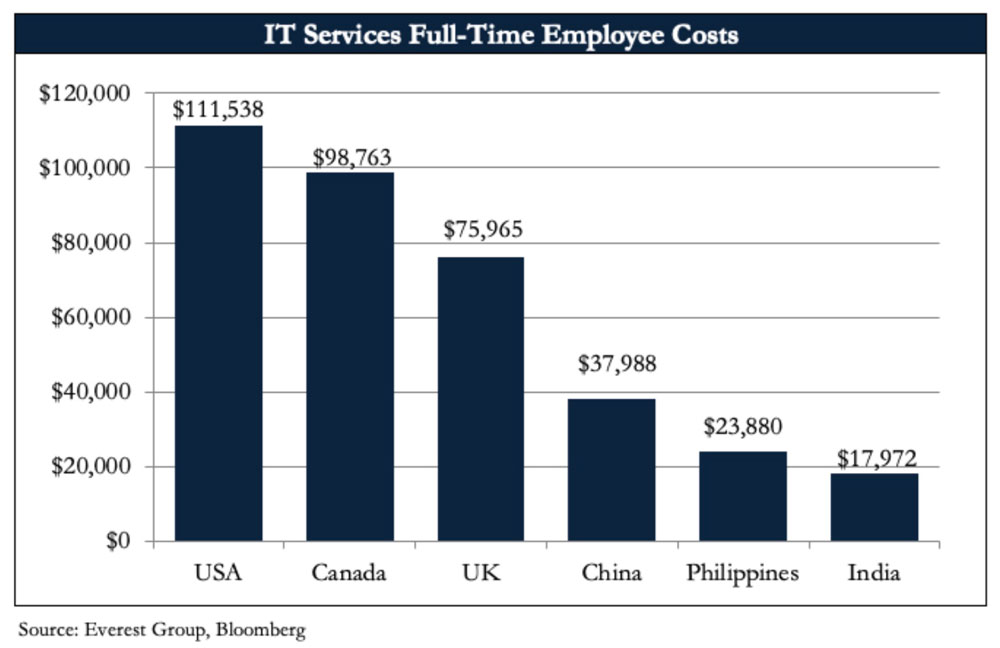 Bangalore is home to a top university (they will graduate 100,000 students this year) allowing companies to hire from a pool of young, educated, English-speaking talent. More importantly, this talented workforce comes at a very inexpensive price. The average annual earnings for an IT worker in the U.S. are $112,000. In India, they are a mere $18,000 or 16% of the costs in the U.S.

Here in Bangalore, we visited one of the world’s largest IT service providers that has been successfully providing large global companies with basic technology back-office functions at a fraction of the costs of developed market counterparts for the last three decades. The sector is in the midst of a wave of new IT spending as many large global companies shift towards digital technologies such as the Cloud, Artificial Intelligence, and Mobile Applications. As a result, this company is projected to easily grow revenues at a double-digit pace over the medium term.

An alternative way to play India’s IT service advantage is to invest in the office space used by these technology companies to place their hundreds of thousands of employees. One such company is listed on the Singapore stock exchange, but owns and operates several IT parks across India. In fact, they built India’s first IT park in Bangalore in 1994. The International Tech Park Bangalore has been widely successful over the last twenty-five years and hosts behemoth technology companies such as IBM as well as other multi-national giants such as General Motors. The campus is quite impressive with its amenities including a mall, a hotel, and naturally, a cricket field (envision Apple’s Palo Alto campus with an Indian flavor). The 4 million square feet of office space is fully occupied by 220,000 employees. Demand is so strong that another 1.2 million of square feet is currently being developed, of which 100% is already pre-leased.

From Silicon Valley to Wall Street (Kind of…)

After Bangalore, we flew on SpiceJet (Red. Hot. Spicy. And terrifying) to Mumbai – the Financial Capital of India. In Mumbai we met with a number of financial professionals to gain their “on the ground” insights, but the highlight was a meeting with India’s largest private consumer bank which has been growing revenues by 20% per year throughout this economic cycle.

Indians are avid savers with personal savings rates in the 20% range (versus low single digits in the U.S.). Those types of savings rates are typically a goldmine for banks; however, Indians have historically piled their savings largely into physical assets, such as property and gold, rather than into financial products, such as deposits, stocks, and insurance. This dynamic is changing as Indian millennials become more important economic contributors and India attempts to shift away from a cash economy to one where the movement of money is more digitalized. It has naturally occurred as technology has become more prevalent, but the transition was also accelerated by Prime Minister Narendra Modi’s demonetization efforts in 2016 when certain ₹500 and ₹1000 banknotes had to be deposited into the banking system.

As a result, this Mumbai-headquartered bank’s deposits have more than doubled within the last four years. The opportunity to continue this type of 20% annual growth appears unlimited for the foreseeable future, highlighted by the fact that there are only 33 million credit cards in the country compared to over one billion in the U.S. With this bank’s ability to approve loans to banking customers in just 10 seconds via its mobile app, it should be able to benefit from digitalization and India’s population shift towards consumerism.

Most of our meetings kicked off with a casual discussion of the chaos that is India. There is no better example than the city driving. There are no stop signs. There are a limited number of streetlights. There are lanes, but they appear to be more of a suggestion. There is also liberal usage of the horn, not to mention an occasional cow walking in the center lane. For our first meeting in Bangalore, it took over an hour to drive less than twelve miles. However, rather than harping on how long our short-distanced journeys would take, we were instead impressed with the actual level of human flow. Simply put, a lot of people were on the move. These traffic dynamics can be viewed as a microcosm of the broader Indian economy. It isn’t perfect and it certainly can improve, but that doesn’t change the simple immenseness. I sum up the Indian people with one word: determined.

As a democracy operating under English contract law inhabited by a young, fast-growing, English-speaking population, it is a bit confounding that India’s free market economy is not ranked higher on a global scale. India has the world’s second largest population, yet only the 7th largest economy. More telling is its ranking of 142nd on a GDP per-capita basis (i.e. output per person). Despite having similar populations, China’s economy is nearly five times larger than India’s. With all of its perceived competitive advantages, India’s economy should be much further ahead in its development. Furthermore, India could be expanding at a double-digit pace if it were able to clear herself of all the roadblocks. The Indian professionals that we met with were all in agreement with this assessment. But with a sense of optimism that appeared ingrained in the culture, many were quick to highlight that India is still growing at 7 – 8% annually (compared to 1 – 3% for the developed world) and will eventually get to its final destination.

nterestingly, India appears self-aware of its issues. The new government under Prime Minister Modi has implemented a number of important reforms to combat issues such as corruption, tax evasion, and bankruptcy. The advances achieved in the eight years since our last visit have been remarkable and visible. However, it is clear that much more needs to be done to improve the country’s fortunes (infrastructure comes to the fore of our minds, given our travel experience). Yet, even if there isn’t the political wherewithal to implement necessary reforms, gravity will likely pull India along the path of growth. Within 10 short years, India is projected to be the third largest economy in the world. The long-term goal is to graduate from an emerging economy towards a developed (organized) economy, bringing hundreds of millions of people from the lower class up into the middle class. The journey will likely be chaotic.

India’s first PM, Jawaharlal Nehru, said in reference to the country’s politics, “The policy of being too cautious is the greatest risk of all.” We think this can be applied to investing in India as well. Investing in India is fraught with risks. However, we believe that it would be an even greater risk for our clients to not have exposure to one of the great potential growth stories over the next few decades.

Download Market Research Report PDF
The views expressed in this material are the views of Andrew Hartline through the period ended 12.18.18. The views are subject to change based on market and other conditions. This document contains certain statements that may be deemed forward-looking statements. Please note that any such statements are not guarantees of any future performance and actual results or developments may differ materially from those projected. This is not an offer or solicitation for the purchase or sale of any security and should not be construed as such. References to specific securities and issuers are for illustrative purposes only and are not intended to be, and should not be interpreted as, recommendations to purchase or sell such securities. Vero Beach Global Advisors, LLC is governed under the Securities and Exchange Commission as an Investment Advisor under the Investment Advisors Act of 1940. All investments contain risk and may lose value.
Newer Australia
Back to list
Older United Kingdom